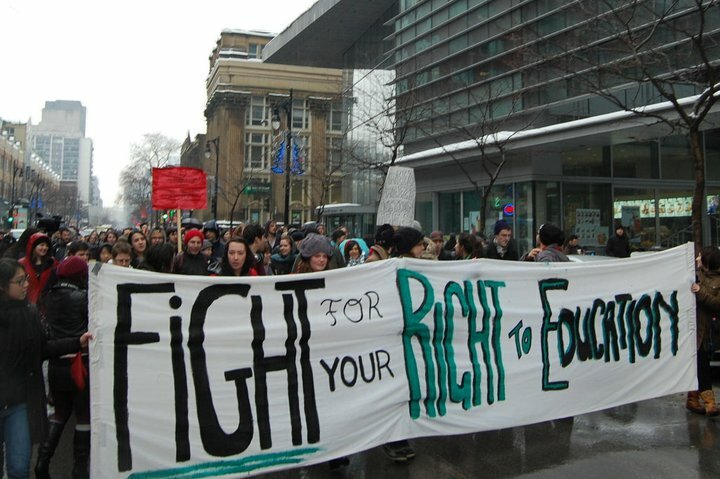 The CLASSE*, as a temporary structure built upon l’Assocation pour une Solidarité Syndicale**, subscribes to confrontational syndicalism [syndicalisme de combat]. This movement affirms that the state and local administrations are, by definition, opposed to our interests. The state is not a neutral entity in which all stakeholders exert equal influence: rather, it must be seen as subordinated to certain lobby groups, particularly the employers’, which reach across party lines. Following this logic, students become second-class citizens subject to every whim of the ruling elite. The only way to push for our demands therefore becomes building leverage through an escalation of pressure, in order to coerce our political antagonists into negotiations. The 2012 Unlimited General Strike is a good example of this escalation: over the last two years, we graduated from modest demonstrations to a full-fledged general strike. Additionally, we must not shy away from employing direct action in order to disrupt the activities of the state and cause real economic damage. Even if we cannot, as an organization, associate ourselves with every action, it is critically important to respect the diversity of tactics, the right for individuals who are part of our struggle to resort to more assertive tactics.

The success of any social movement depends on effective mobilization and information. To this end, CLASSE’s structures are built according to principles of direct democracy, in order to surrender control not to a few executives but to the entire membership of local unions that are members of CLASSE. Elected members of councils and committees are bound by mandates adopted democratically in local General Assemblies and the highest governing body of CLASSE, the Congress. Moreover, confrontational syndicalism demonstrates our solidarity with other social movements and struggles. Indeed, we do not want to merely defend the material interests that affect us as students but what concerns us as members of society.

History has proved the effectiveness of confrontational syndicalism. We must continue to uphold it in order to better fight for our vision of education: a democratic system freed from tuition fees and corporate influence.

THE MOVEMENT GROWS: From a Student Strike to a Popular Struggle in Quebec

The Independent: The UK’s postgraduates are being left behind in a ‘perfect storm’ of problems