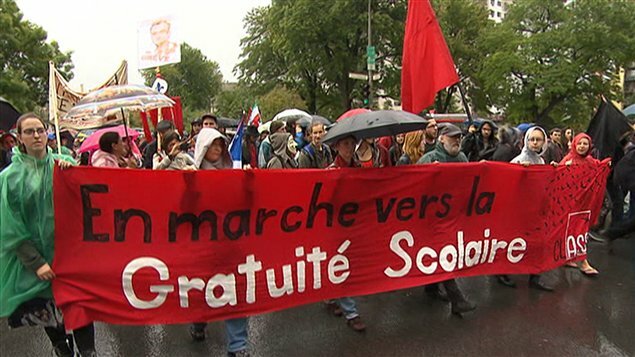 Action guided by anti-racist and anti-colonial analysis is essential to imagining and building liberating alternatives to our current social order. The experience of the inspiring movement ignited by Quebec students this year confirms this belief, as questions about its diversity and about incidents of racism have increasingly emerged.

Anthony Morgan’s March 2012 “La grève et les minorités” (“The strike and minority groups”) was one of the first articles published about issues of race in the movement. Morgan challenged the movement discourse of accessibility, highlighting how education has always been a site of struggle for Indigenous and Black learners in Quebec. The article appeared the week after a group of about five white people at the massive March 22 demonstration in Montreal chose to paint their faces black and pull an enormous papier-mâché head of Quebec Premier Jean Charest throughout downtown Montreal. The racism embedded in this “blackface”performance gave some observers the confirmation they needed to dismiss the movement as essentially “white” and racist, composed of privileged white kids concerned only about themselves.

For myself and for other racialized students who had been participating in campus and student movement activism, the March 22 incident and responses to it by Morgan and others highlighted the importance of asserting our presence, ideas and experiences of education and activism as students and people of colour. Several of us had been meeting and organizing together after forming the Students of Colour Montreal collective in January. We felt that the dismissal of the movement as “white” erased the presence and contributions of a growing number of racialized activists.

I feel now as I did then, that we should be cautious of making too much of what five or so individuals did in one demonstration of many, within a movement of hundreds of thousands of people. Even though I was at the demo that day, I did not actually see the people with their faces painted black until days later in media photographs and online posts. Something about the visibility of those few protesters and the relative invisibility of the (actual) Black people and other people of colour involved in the movement and at the protest that day — there were significantly more than five (or even 50) of us! — raises questions about how we are accustomed to thinking about, discussing, and living with race and racism.

The blackface performance in March remains the go-to example of racism in the movement, including the claim that at the protest no one confronted the individuals in question. This claim continues to be repeated despite being absurd and false.Absurd, because who can claim that “no one” did anything in a ? False, because on that day I actually learned about the “performance” in question from a friend who had just confronted the people involved about the racism in their actions. From what I was told several other people confronted them as well.

So, rather than beginning by identifying incidents of racism in the student movement, let’s back up and establish first the racialized context from within which the movement emerged.

Race and nation in Quebec

Quebec society, like the rest of Canada, was built on land and resources stolen from Indigenous peoples and developed through colonialism and the exploitation and enslavement of Natives and Africans by both the French and the English. The French themselves were historically oppressed by the English in Canada, and have had to fight ongoing battles for the rights to practice their language and culture as well as for access to education. This gives the Quebecois the historical position and identity of both colonizers and colonized.

Their oppression by Anglophone Canada caused many Francophone Quebecois in the 1960s to identify with other oppressed people, particularly activists and writers of the African and African Diaspora anti-colonial, civil rights and Black Power movements of the era. This identification was underscored by such expressions as “speak white,” borrowed from the American South and used in a derogatory way to instruct the Quebecois to speak English. This informed the now famous formulation of the Quebecois as les nègres blancs (the assumed reference to which the protesters in blackface on March 22 were gesturing). The problem with this metaphor for Quebecois experience is, of course, the implicit premise of moral outrage over white people being treated as poorly as Black people.

As many have already observed, the social movements of the late 1960s and early 70s can be understood as the precursors to the current movement in Quebec. This is particularly true of the widespread student strike of 1968-69, the Common Front labour movement in 1972 and the student strikes of 1973 and ‘74. The social movements of this era often involved students, unions and other working-class organizations and nationalist groups working together, as in theOpération McGill Français mobilization around demands that the elitist anglophone McGill University become a francophone, Quebec nationalist, pro-worker institution. Then, as now, students and other activists also understood the need for an anti-capitalist alternative model for Quebec society.

And now as then, amidst this fight for the rights of the masses in Quebec, the plights of Indigenous, Black and other communities of colour are much less visible and audible as they face ongoing institutional racism and other forms of oppression at both the federal and provincial levels.

The 2012 Quebec student movement has arisen out of these histories and in the context of a population within which “Aboriginal” and “visible minority” people combined make up roughly 10%. Against this backdrop, we can anticipate some of the challenges that the student movement faces in relation to issues of race and decolonization.

Strengthening anti-racism in the movement

The fight for access to quality education has been historically located alongside and within the broader context of Quebec nationalism. As nationalist symbolism and discourse becomes more prominent in today’s student movement we need to recognize that indeed as Celine Cooper has put it, these symbols come with baggage. We need to think critically about the « nous » in such slogans as Maîtres chez nous (Masters of our own house); À qui le Québec? À nous le Québec! (Whose Quebec? Our Quebec!); and Tout est à nous, rien n’est à eux!  Tout ce qu’ils ont ils l’ont volé! (Everything is ours; nothing belongs to them! Everything they have they have stolen!) We need to create new chants and slogans that acknowledge class exploitation andassert an anti-colonial and anti-racist orientation.

Calling attention to racist and neocolonial language and practices is the first step towards rooting out oppression in the movement, but our dialogue should not stop there. Analysis must examine how our society is organized in order to effectively guide action to challenge racism and all forms of oppression. In addition to denunciation and protest of the Quebec Liberal government’s tuition hikes, other cuts to social spending and draconian Law 12 (Bill 78), our critique should target the broader neo-colonial, racist, anti-immigrant, and anti-worker policies of the Harper government (as seen in the recent passing of Bills C-38 and C-31).

Asserting our presence and working across differences

Anglophone and ethnoculturally diverse student involvement as well as inter-sector organizing among students, employed workers and the unemployed are ongoing challenges that may very well determine the long-term outcome of the social movement in Quebec.

Racialized students involved in campus associations, mobilization groups and coalitions such as Quebec’s CLASSE can contribute to more diverse, less oppressive practices and policies. Associations, groups and coalitions can propose and pass anti-colonial, anti-racist motions such as the one adopted by the CLASSE congress in May and use these as a starting point for instituting more critical anti-oppressive practices.

The visible presence and public voices of groups and collectives of people of colour as part ofrather than alternatives to the social movement can aid in challenging ideas about such issues as access to education and identity in Quebec. The fact that Indigenous and racialized communities in Quebec and Canada have been fighting for access to education and against police violence and various other forms of state repression for generations needs to be more broadly understood.  There needs to be widespread understanding that tuition hikes and other cuts to social spending disproportionately impact marginalized communities and reinforce systemic racism, violence and oppression.

The hope lies in the fact that the ways people understand themselves as a society can change. For many of us, participating in the student movement has created a stronger sense of Quebec citizenship and belonging than ever.Can Quebec society and the identity of “Quebecois/ Quebecoise” be re-imagined in anti-colonial, anti-racist terms for the 21stcentury?

As students have done so often throughout history, the 2012 Quebec student movement has provided a spark that has ignited a large portion of the province’s population. We must continue to move in the direction of cross-sector, diverse, inter-community organizing and demands for social change. We need to focus not only on stopping tuition hikes or austerity measures, but also on envisioning and fighting for viable, radical alternatives to racist neoliberal capitalist societies.

rosalind hampton is an educator and activist and is a member of Students of Colour Montreal.